Incentives offer a unique and promised opportunity for cities & citizens to shift towards sustainable lifestyle by leveraging the best practices of behavioral economics, fintech platforms & SDGs global to local philosophy.Team FinTech of the India Smart Cities Fellowship pioneered a framework to provide customized citizen benefits in the form of monetary and non-monetary incentives.Involving diverse stakeholders such as municipal leaders, merchants, citizens, system integrators and private sector, the team mapped the aspirations of citizen groups and curated targeted incentives through local market alliances to nudge citizens towards responsible social behavior. The citizens of city receive a plethora of financial benefits such as cash backs, merchant discounts, vouchers, & reduction in premiums. Simultaneously, the citizens were also nudged through non-financial incentives such as social media recognition and awards from municipal leaders thus increasing their sense of community ownership. Using these initiatives, the city increased public transport usage, reduced pollution, improved municipal revenue and boosted citizen responsiveness towards government initiatives.

“Team Fintech intended to prove that incentives, monetary as well and non-monetary, are effective tools to nudge good citizen behavior and unify citizen-municipal-private interactions via a seven-pronged nudge approach”

Since tThe project was exploring the intersection of Incentivisation based behavioural economics, fintech based platform approach and sustainability of cities in form of SDG compliance, the Team worked on first defining major objectives and then mapping those with the stakeholder specific aspiration scenarios.The broad intended outcomes that Team sought to achieve were:

While the team visited Chandigarh, New Delhi MC, & Pimpri-Chinchwad, Thane was ultimately chosen on a set of parameters which favored the project deployment, viz.:-

b. Project Development and Implementation

Team combined a top-down management consulting approach for problem structuring with a bottom-up understanding of the governance ecosystem for designing solutions, while leveraging data and technology to enableimplementation of solutions, with the objective of making governments accountable and deliver with minimum delays and maximum efficiency.

Given below is the snapshot of the approach that the team undertook while navigating its way through the project journey: -

The citizens of Thane received a plethora of financial benefits such as cash backs, merchant discounts, vouchers, & reduction in premiums. Simultaneously, the citizens were also nudged through non-financial incentives such as social media recognition and awards from municipal leaders thus increasing their sense of community ownership.  A brief of seven pilots, along with learnings and approach, is provided below: -

(Pilot: I) " Increasing cycle adoption as a shift towards NMT transport"

To promote cycling team asked the city app to collaborate with a major cycling partner "Coo rides" for incentivising the data driven cycling usage and # of km travelled by bicycle shared via open API linkage. The Incentive ranged from:

Based on our work, we are optimistic that utilizing the seven-pronged smart incentive approaches spanning across mobility, citizen engagement, waste cycling, health information system, tax collections, electricity reduction and youth volunteering would ultimately enable the partnering cities to achieve robust and enduring long-term sustainable lifestyle shifts. The team has prepared a best practice SOP handbook, based on learnings received during seven pilots, for other cities to undertake similar activities in order to make their cities sustainably smart.

Further as a next step forward, the team believes that a centralized incentive platform - “Good Citizen Rewards Bank”- owned by MoHUA in partnership with 100 smart cities would be the logical step in ensuring the incentive-based transition towards sustainable cities in addition to the seven-pronged approach undertaken by the team. 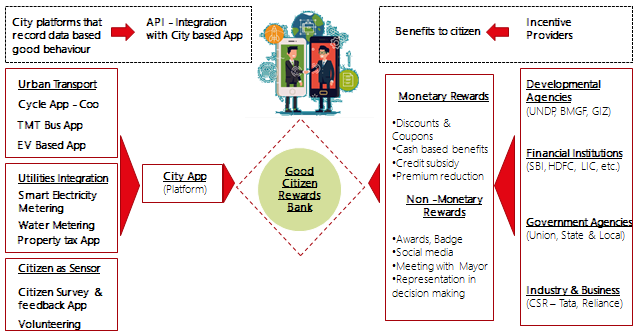